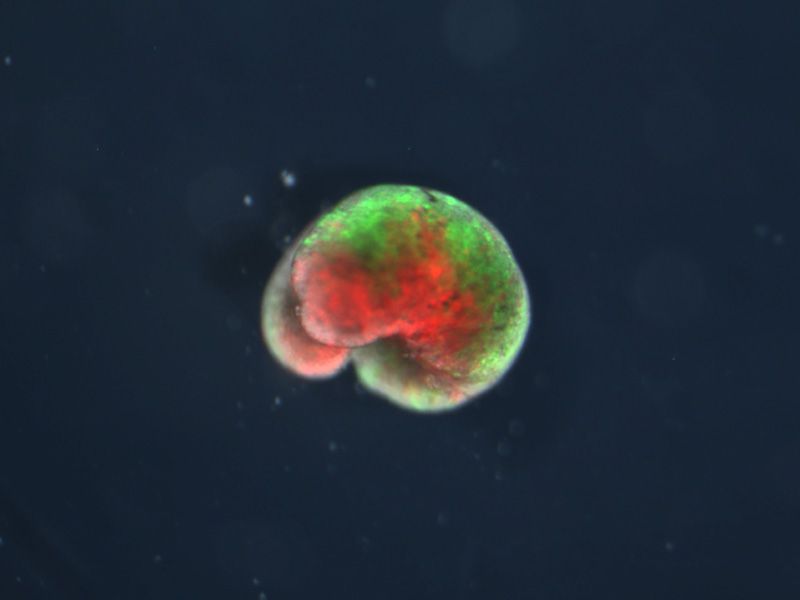 In ’s laboratory at Tufts University, cells can expect to find themselves in unusual company.

Here, the precursors of frog skin sidle up to cells that, in another life, might have helped an amphibian’s heart beat. They’re perfect strangers: biological entities that, up until this point, had no business being together. And yet, Levin and his colleagues have found that skin cells and heart cells can be coaxed into coalescing. Placed side by side, they will self-organize into intricate, three-dimensional mosaics of frog cells that aren’t actually frogs.

Designed by a computer algorithm and surgically shaped by human hands, these skin-heart hybrids, each roughly the size of a grain of sand, don’t resemble anything found in nature. But the tasks they accomplish are eerily familiar: Without any external input, they can zoom around Petri dishes, push microscopic objects to and fro, and even stitch themselves back together after being cut.

Levin calls these clusters of cells a “new form of life”—one that’s not quite an organism and not quite a machine, but perhaps somewhere in between. Named “xenobots” in honor of the Xenopus laevis African clawed frogs from which their cells derive, they have enormous potential to reveal the rules that govern how the building blocks of life assemble.

With a lot of additional tinkering, xenobot technology could also someday be harnessed to deliver drugs, collect environmental contaminants, and more, Levin and his colleagues write today in . Unlike traditional robots, they argue, the living, self-healing xenobots of the future could theoretically accomplish these feats without polluting the planet—and repair themselves to boot.

As plastics and other difficult-to-degrade polymers continue to , the “incredibly innovative approach” offered by the xenobots “could be really important for sustainability,” says , a biomedical engineer and synthetic biologist at the University of Utah who wasn’t involved in the study.

But xenobots also raise a bevy of ethical questions. If things go awry, humans may need protection against these and other forms of artificial life—or, perhaps, vice versa. “When you’re creating life, you don’t have a good sense of what direction it’s going to take,” says , who studies the ethical ramifications of new technologies at Duke University and was not involved in the study. “Any time we try to harness life … [we should] recognize its potential to go really poorly.”

A computer algorithm designed „living machines“ made up of frog cells (top). These designs were then created in the lab (bottom) and tested for various behaviors.

In the past several decades, humankind has made staggering advances in robotics. Machines can now master difficult , and as autonomous vehicles, and in the wake of disaster. But many of the basic functions that living things accomplish still flummox devices built by human hands. Even in their most creative configurations, metals and plastics simply can’t live up to cells.

“Biological systems are kind of the envy of all robotics,” Levin says. “They’re adaptable, they’re flexible, they self-repair. We don’t have robots that can do that.” So Levin and his colleagues decided to try and build one that could.

Teaming up with roboticists and at the University of Vermont, Levin and , also at Tufts, asked a computer algorithm to design a series of living machines, using only a few hundred or thousand frog skin or frog heart cells as raw ingredients. The algorithm was instructed to optimize each xenobot for a different basic function, like moving back and forth or manipulating objects.

“It’s pretty much a hands-off method,” Bongard says. “We tell the algorithm what we want xenobot to do, but we don’t tell it how the xenobot should do it. So the algorithm can explore this infinite space of form and function.”

After cycling through multiple configurations, the algorithm would spit out the digital blueprints it believed were best suited to the task at hand. The researchers would then attempt to recreate these designs in Levin’s lab.

A xenobot, made out of frog stem cells, designed to have four limbs.

Even after being scraped out of frog embryos and shaken apart in a fluid-filled dish, skin and heart cells will eagerly glom together, aggregating into amorphous clumps thousands of units thick. “The cells like to be with each other,” Levin says. Next, Blackiston, the team’s resident microsurgeon, would take the nascent bots and sculpt them into shapes specified by the computer.

All the xenobots’ ingredients were bona fide frog. But there was nothing amphibian about the final forms they took. A few were crafted into two-lobed blobs, while others took the forms of hollow, prism-like structures. The bots lacked limbs, skeletons and nervous systems. But they handily tackled the tasks they’d been designed to do.

Tailored to maximize movement, some scooted along the bottom of a Petri dish like microscopic inchworms, powered solely by the contractions of the heart cells studding their interiors. Others, built to transport bits of particulate matter, herded their cargo like sheepdogs, while more still carried it in vacant pouches carved into their custom-made bodies. In some cases, xenobots even interacted, colliding and orbiting each other before eventually coming back apart.

The team’s approach, which relies on a mashup of computational and biological techniques, resembles other technologies that have rejiggered the known building blocks of life, says Deans. But rather than tweaking a known template like DNA, the team’s technique—which simply rearranges existing cells into new configurations—feels more organic, she says. “This process … has a resounding respect for the biology that’s involved.”

At just a millimeter or so across, the xenobots aren’t capable of much yet. Devoid of mouths or digestive systems, they’re fueled exclusively by the bits of embryonic yolk they came with, and die after about a week when that juice runs dry, Bongard says. But he and his colleagues think the bots could someday be used to deliver drugs into human bodies, or scrape plaque out of arteries. Released into the environment, they could quantify toxins, or sweep microplastics out of oceans.

The team is already experimenting with different sorts of cells, tasked with new types of chores. In a haunting echo of their particle-herding behavior, their xenobots also seem capable of making new versions of themselves, corralling single cells together until they start to coalesce, Levin says. They’re also resilient: When sliced open, the bots simply repair their wounds and carry on.

While a lot of good could come out of this technology, it’s also important to consider potential downsides, says , a philosopher and machine ethics expert at the University of Connecticut who wasn’t involved in the study. In the wrong hands, the power of xenobots could easily be exploited as a bioweapon, ferrying poisons instead of medicines into people. There’s also cultural acceptance to consider: The mere idea of reassembling existing life forms could be troubling to some, evoking thoughts of Frankenstein’s monster or the experimental vivisection in H.G. Wells’ 1896 science fiction novel The Island of Doctor Moreau.

Humans have certainly tinkered with the recipes of life before. In recent years, bioengineers have reprogrammed cells to , stripped genomes down to their , and cobbled together amalgamations of cells from one animal that . But bespoke forms of multicellular life, synthesized from scratch, are still few and far between—in part because much of biological development remains a black box: Researchers still aren’t sure, for instance, how tissues, organs and appendages manifest out of single cells.

Studying xenobots could certainly help crack that developmental code. But to get there, scientists will first have to experiment with techniques and technologies they don’t fully understand, from the machine learning algorithm that designs these life forms to the cells that spontaneously comprise them, Anderson says.

What the team has presented so far is an early advance, and there are no guarantees about what will emerge from the research, Farahany says. “But for this kind of work, it’s going to be integral to think about what the appropriate ethical frameworks and safeguards would be,” she adds. “When you have something living, you need fail-safe measures, and you need to know that you can pull the plug.”

Bongard and his colleagues acknowledge the gravity of their work. “The ethics around this are non-trivial,” he says. Though the team hasn’t yet brought bioethicists into their research, “it’s something we’ll need to do in the discussion of what to do with this technology,” he adds. First, though, “we just wanted to demonstrate that this was possible.”
2020-01-13 23:48:37
http://www.smithsonianmag.com/innovation/scientists-assemble-frog-stem-cells-first-living-machines-180973947/