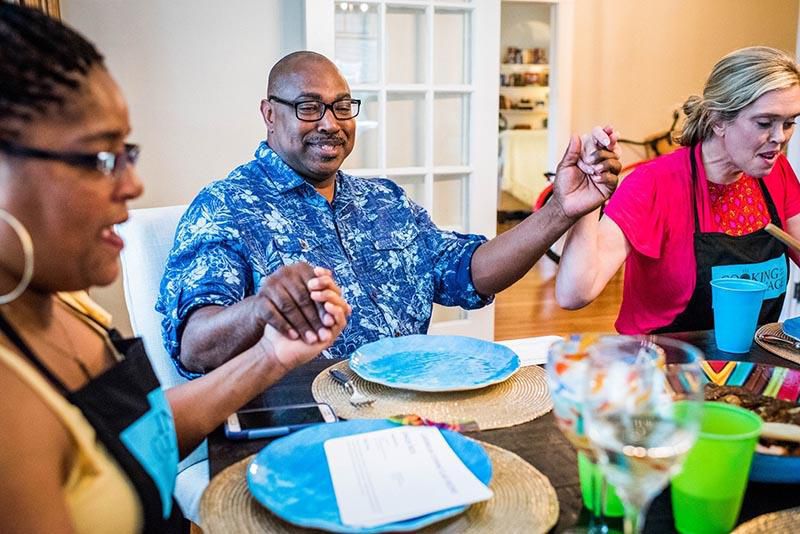 Couples, friends and a few solo women have gathered in the kitchen of a suburban home in Tupelo, Mississippi, where they’re working alongside their host, Mary Ann Plasencia, to make meat-filled empanadas and pineapple chutney, among other dishes. As Plasencia taught a few of us how to fold and then press together the edges of our empanadas using the tines of a fork, she imparted a treasured part of her Cuban heritage.

The evening was organized by , a nonprofit designed to break down cultural barriers over food. From New Haven, Connecticut, to Cleveland, Ohio, a growing number of cooking classes and supper clubs are using cuisine to bring together U.S.-born residents with immigrants, refugees and temporary transplants. The groups meet regularly, in a comfortable and non-threatening environment—usually a private residence or small commercial kitchen—and do away with the typical guest-host hierarchy.

One of the key components of each evening: the host and the guests cook and dine together, negating what , a sociocultural anthropologist at the University of California, Los Angeles, calls a “pre-established contract” that usually exists between the two. “This does away with any former structures,” says Hart, “and creates a neutral space among all of the participants.”

Before taking root in small cities, the trend got its start in major urban centers. As a descendant of Hungarian Jews and the daughter of a Korean immigrant, artist Lisa Gross was well aware of what the diversity of her native New York City offered her. She noted that the majority of culture exchanges were often service-based, in locations like a neighborhood bodega. Gross identified a need for balance in those interactions, where immigrant and refugee women could instead be on equal par with those who would otherwise be clientele. In her view, the sharing of culinary knowledge and the conversing across cultures were as important as the goods being exchanged. (As was the chance to offer some financial stability to disadvantaged groups in the process.) She launched New York City’s The League of Kitchens—in which small groups gather in the homes of immigrant women to learn how to make regional dishes, and about their culture in the process—back in 2013, and it began receiving press almost immediately. The organization has since hosted more than 1,000 dinners, runs about 16 to 20 workshops per month and employs 12 instructors from countries like Lebanon, India and Nepal. Soon, similar workshops sprung up in other cities, including Los Angeles and Seattle. More recently, this idea of forming across-border friendships over food has spread to lesser-populated cities and communities as well.

In a League of Kitchens cooking class, Damira Inatullaeva teaches participants how to cook Uzbek food in her kitchen in New York City.

“[Such programs] stem from a desire to create a safe space outside of major commitments, like marriage and family,” says Hart, who specializes in globalization and migration. “Food sharing is a very fundamental social bond, and one that’s always been instrumental in bringing communities together in everyday life.”

Today, more than live in the U.S., a number that represents 13.6 percent of the total population. That percentage has nearly tripled since 1970, and it’s just shy of a historic high of 14.8 percent in 1890. Immigration has become a heated political issue, and as the country’s foreign-born population grows, so too does

McElwain’s organization grew out of a dinner she hosted in 2017 for a few of Tupelo’s Japanese residents, whose families had relocated for work at a local Toyota manufacturing plant. “It was really their idea to begin with,” says McElwain. “The women—some of whom had kids in school with my own and others who were attending local ELS classes—had seen my food blog and asked me to teach them some southern recipes that are popular within our community.” McElwain quickly learned that while their English was limited, cooking was a language they could share. “Once we were in the kitchen together,” she says. “Our goals were the same.”

From there, they planned another dinner, this time a sushi-making night in which the Japanese women did the instructing. “Once I posted pictures on social media, it blew up,” says McElwain. “A local friend who’s of Indian descent reached out to me and said, ‘I’d love to host a dinner at my house.’ Then another woman reached out and said, ‘I moved here from Mexico and can host a dinner for you, too.’”

The groups do away with the typical guest-host hierarchy.

The nonprofit has since hosted Moroccan, Bangladeshi, Ecuadorian and South African dinners, among others, all led by a home cook that’s either from one of those countries or has a special connection to that particular heritage. For example, Plasencia hails from Florida, but both of her parents grew up in Cuba and emigrated to the U.S. in 1961, nearly three years after Fidel Castro had taken reign. She grew up speaking Spanish at home and dining on traditional family recipes steeped in Cuban culture, like fried croquettes and ceviche. At Cooking as a First Language, professional chefs don’t participate—just Tupelo residents (both men and women, and sometimes families) and a growing number of fun-seeking tourists interested in learning about a culture that’s different from their own. Irma Cubillo, who grew up in Jalisco, Mexico, taught participants how to make pozole verde (a hominy-based stew), while India-born Sunita Prasad led a workshop on chicken curry and Indian-spiced potatoes.

When it’s a group of strangers coming together for a meal, creating a comfortable environment is key. “In Europe, restaurants and cafes opened by migrants are some of the most active spaces of resistance toward anti-migrant activities, and have become very important spots for people to be able to socialize in a public space without fear,” says Hart. “[These supper clubs] go along with the nature of American life being more privatized, but seem to be working in a similar vein.”

Hart also believes such programs represent the ways that Americans are finding their own solutions to the realities we’re facing. “We’re living with one another daily, and we have a choice whether we’re going to let someone else deal with this divide, or take action to do it ourselves,” she says.

Inatullaeva shows participants how to fold Uzbek barak, or dumplings filled with mince and onions.

Breaking Down Barriers from Coast-to-Coast

A program of New Haven’s nonprofit fresh food purveyor, CitySeed, Sanctuary Kitchen invites immigrants from countries like the Democratic Republic of the Congo, Afghanistan and Sudan to share their culinary and cultural heritage in CitySeed’s commercial kitchen space. Learn how to make such dishes as traditional baklawa with pistachio and Ghanaian groundnut soup, then sit down to a facilitated discussion that includes experiences of resettlement while dining on your creations.

Originally known as the Syria Supper Club, this charity nonprofit works with emigres from ten countries, including Syria, El Salvador and Rwanda, to host in-home supper clubs throughout the New York City tri-state area. You supply the venue, drinks and attendees, and the United Tastes of America provides both a skilled cook and interpreter who later sit down alongside you as guests—participating in both the meal and the conversation while reaffirming equal footing.

Women from Zimbabwe, Iraq and a number of other countries share both their cuisine and personal stories while leading cooking classes for small groups and individuals. The nonprofit also provides income for refugees and immigrants through the sale of their own handmade goods, which include tote bags, linen and leather aprons, and whipped shea butter.

A worker-owned co-op that empowers refugee and immigrant women through food, Mera Kitchen Collective (itself founded by immigrant refugees Iman Alshehab from Syria and Aishah Alfadhalah from Kuwait, along with Detroit’s Emily Lerman) hosts both cooking classes and pop-up events in private homes and restaurants. Dine on shawarma at Baltimore’s Fadensonnen biergarten or mezze at the rooftop bar of the Lord Baltimore Hotel. Mera’s cooks come from countries like Jordan, Honduras, Cameroon and Burkina Faso.
2020-02-13 23:00:52
http://www.smithsonianmag.com/innovation/these-supper-clubs-are-using-food-cross-cultural-divides-180974197/